~ The 2007 Eastern NC MS150 Bike Tour ~
~ A Note From RIDER #150 - My 10th Year In A Row ~
Last Thursday I visited the orthopedic surgeon and got the "go-ahead" to attempt this one hundred and fifty mile, two day bike tour. The tour will be the 8th and 9th of September this year. I have recently had a bout with a serious case of degenerative arthritis in my knees and on Thursday I got my very first cortisone injection in my left knee. I told Evelyn the next morning that I felt like a cross between Scooter-Libby and Barry-Bonds, I got a reprieve from the pain I was enduring and would continue to endure and I am now officially on steroids. I guess this also means I'll not be signing up for Le Tour de France.

With your help I hope to match and even exceed my fundraising efforts of last year. Last year I raised $1,500.00 which earned me the right to wear the GOLD NUMBER 150. This means that only 149 other riders raised more than I did for this cycling tour.

To help me hang on the Number 150 (or an even lower number) for next year you can send a check made out to the National MS Society to:

Or you can visit the URL "TEN YEARS" and donate online (Here is a shorter URL if that one does not work http://tinyurl.com/3cko92 the text of the URL is http://www.nationalmssociety.org/site/TR?pg=personal&fr_id=5520&px=2027130.

Also my training calendar can be found at http://papa.poemy.net/2007_Bike_Rides/index.html.

If you decide to donate to this cause You will receive training update email messages, a personal snail-mail thank you note and a link to the web page I'll put up describing the event itself (with pictures). This is why I refer to this event as a win-win-win thing. I win because I get to achieve a personal fitness goal, the National MS Society wins because they get more money to support the folks in Eastern NC who have MS and they get to spend more money on research, and the folks who donate win because they contribute to this worthy cause.

The End Of An Era 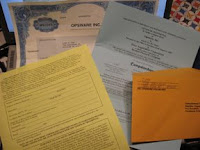 The End Of An Era

This picture represents the end of an era. I started this era back in the early 1980's when I went to work for a venture capital start up named CTi Data. We were among the companies that put together personal computers (along with Tandy, Apple and IBM) Our "Claim-To-Fame" was that we had a multi-user computer that also had a communications cluster controller function. A user could with the press of a keystroke (Alt-Esc) switch between a 3270 Main-Frame connection and a CPM computer session. (Actually it was called MPM). We even ported a version of the Microsoft DOS OS to this system after receiving assurances from Microsoft that they would soon come out with a Multi-User version of DOS (which they never did until the advent of Windows NT 2000 and the RDP protocol - which they purchased from Citrix).

As we were coming up with our solution IBM was coming out with their solution called the PC. Needless to say we did not survive. The venture capitalists sold Cti Data to Rabbit Software a company that sold IBM the communications stack SNA to run on their AIX operating system.

After a while Rabbit Software merged with Tangram Corp. and later Tangram was purchased by OPSWARE.

Finally OpsWare was purchased by Hewlett-Packard Co for $14.25 a share. When my shares with Cti Data vested I sold them all except for the remainder when divided by 1,000. My shares in Cti Data, then Rabbit, and then OpsWare were diluted by various reverse splits and I finally wound up with two shares of OpsWare.