The cold front that swept past the East Coast in this set of pictures forms an almost perfect circle. Here in Raleigh we actually got 0.25" of rain from a thunderstorm associated with it. After the rain I brought up the local weather radar and noted that the front was already past interstate highway 95. Very cool temperatures this morning in the low 50s.

Posted by Unknown at Tuesday, September 29, 2009 No comments:

Autumnal Equinox - Sep 22 2009 5:18 PM EDT. This is the official time. However the actual date of equal hours of day and night occur around the 26th of the month at 40N latitude which is near where I live. Here is a link that discusses this. The 'short-reason' for this is due to how the atmosphere bends sunlight so that you see the sun rise a bit before the geometric sunrise and you see the sun set a bit after the geometric sunset thus daylight is extended a bit. So the geometric Equinox occurs at 5:18pm EDT on the 22nd while the actual Equinox occurs on the 26.
Posted by Unknown at Monday, September 21, 2009 No comments:

Memorable Bike Crashes Over The Years


Here is a clickable map from Google maps that lists some of my most memorable bike wrecks over the years. I got the idea when I read an email from Bicycling.COM that talked about bike wrecks and suggested that I visit their site and discuss them in their online forums. This post is totally random and means absolutely NOTHING to anyone but me, I expect, but it was fun to recall these events.

View Bicycle Crash Sites in a larger map
Posted by Unknown at Tuesday, September 15, 2009 No comments:

Saturday morning (DAY-1 12 SEP 2009) was a beautiful day for a bike ride. We actually left the bikes down in Morehead City from last weekend's Saturday ride and Sunday ride. So we loaded the bikes up last night and took off for New Bern early this morning. Here is a link to a picture of us before we left for the ride. And here is a link to a picture of us after we returned.
Here are the statistics for the ride:
47.62 .. km total distance.
21.00 .. kph average speed.
02:16 .. hh:mm total time.
Sunday morning (DAY-2 13 SEP 2009) was another beautiful day for a bike ride. This day's route was different from Saturday's. We road out of town to catch US70E across the Trent River Bridge then looped around as if to go into New Bern over the draw bridge (which is being replaced hopefully in 20010 by the time the next MS150 takes place.) Instead of heading toward the new bridge we made a U-Turn and heading up the south/east side of the Trent River. What a beautiful ride. We rode all the way to Pollicksville where we found a rest stop and then on US17 North back to New Bern. A beautiful ride. I'll post some Picasa Album pictures of Sunday's ride and update this post soon. Here are the Sunday Statistics:
54.48 ... km (total distance)
20.30 ... kph (average speed)
02:40 ... hh:mm (total time)
Here is a web page I put up with links to the pictures and previous rides: http://papa.poemy.net/2009_MS150.
Posted by Unknown at Saturday, September 12, 2009 No comments: 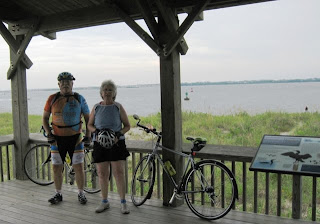 Today we put the bikes on top of the car and drove over to AB and then rode up and down NC58. First to Fort Macon where we visited the inlet overlook shelter and had a couple of other bikers snap our picture. Then back down the island through AB to the Pine Knoll Shores NC Aquarium. We stopped for an ice cream cone at the refreshment stand and then peddled back to AB. Here are the statistics for this ride:
30.85 km .... Distance
19.10 kph ... Average Speed
01:37 hh:mm . Total Time
Posted by Unknown at Sunday, September 06, 2009 2 comments:

I've just recently started following Paul Krugman's blog and I find his style of writing to be very clear. In this blog post he talks about a longer article he published in the September 2nd issue of the NY Times magazine. I just finished reading the longer article and it too is a very clearly written piece.
In the blog post he talks about natural (non human) systems that can be compared to economics. And references a piece on the Discovery web site that talks about his article, the Discovery piece is titled "Mistaking Beauty for Truth".
Paul Krugman's comment is that rather than use the two concepts General Relativity and Newtonian dynamics as suggested in the Discovery article a better concept would be Meteorology.
Meteorology can be thought of as a non linear dynamical system that is chaotic at it's core with things call attractors. A chaotic system with attractors is one that resist prediction but still stays 'inside-the-lines' and does not go wildly astray.
I think the day to day operation of the Economic System could well be modeled by such a thing.
However the economic system is susceptible to 'opportunistic blooms' which do naturally arise in all sufficiently complex systems. The main characteristic of an opportunistic bloom, and its inevitable collapse is a growing (blooming) bubble and then a bursting bubble.
So my point is you can model economic markets and your model must contain the concept of a bubble (or bloom). This argues for something folks call 'smart-regulation' of the financial system where you do not publish some set of fixed rules and set some group of fixed policies to enforce those rules but instead have flexible rules and enforcement that are themselves policed by being transparent and constantly audited.
Posted by Unknown at Sunday, September 06, 2009 No comments:

A 26km Spin Around The Neighborhood 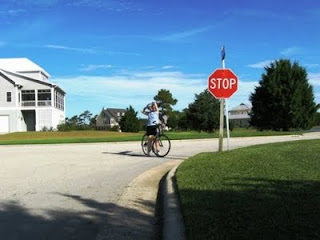 Posted by Unknown at Saturday, September 05, 2009 No comments: