I put my new bell on the handle bar of the bike, stowed my new inner tube in my back pack, put on my new gloves, packed a banana, a pimento cheese sandwich and filled up two water bottles.  I was ready to hit the 'Neuse River Trail'.  I started at Falls of the Neuse parking lot and headed down just past Poole Road where there is a park bench beside the trail.  that was 30 km.  I ate my banana and my pimento cheese sandwich and headed back up the Neuse River.

We've had a lot of rain this year and there was evidence of this all along the trail, especially where Crabtree Creek joins the Neuse River; that was near my turn-around point.

On my way back up river I stopped in the middle of the bike bridge that crosses the neuse a few 10s of meters down river from the Milburnie Dam and took some pictures and a video.  You can see the pictures below and see a link to the video I posted to YouTube.

Today is 'Mother's Day' so Evelyn asked if she could come along on a bike ride.  I got the bikes on the back-bumper-bike-rack.  We got all the gear we thought we would need, including a new package-shelf-seat-post-add-on for Evelyn's bike.  It was the same one that I rode across the USA with back in 2004.  Turns out it is designed for a fatter seat-post but we put some folded up paper to cushion it so it clamped hard enough to work.

So, we headed out to Horseshoe Park unloaded the bikes geared-up and set out down the Neuse River Trail.

We got 16km down the trail and there was this very loud 'BANG'.  It was the rear tire on Evelyn's bike.  An amazing blow-out right in the middle of the tire.  When I looked in the inside of the tire after taking it off it looked like it had a cut in the inside.

A nice fellow 'Cliff' stopped and helped us change the tire.  I had to use my spare 'folding-tire' since it was not just the inner tube but the tire itself that blew out.  The first new inner tube I tried was one left over from a previous flat tire and I finally figured that out and switched to my (last) good extra inner tube and pumped up the tire to around 100psi (it is supposed to run at 120psi) and everything seemed fine.

Rather than continue down the trail we decided that this was a good 'turn-around' point and headed back up the Neuse River Trail to the Horseshoe Farm parking lot.  Here are the specifics of the ride:

And here is a picture of Evelyn and Cliff after we got the tire fixed. 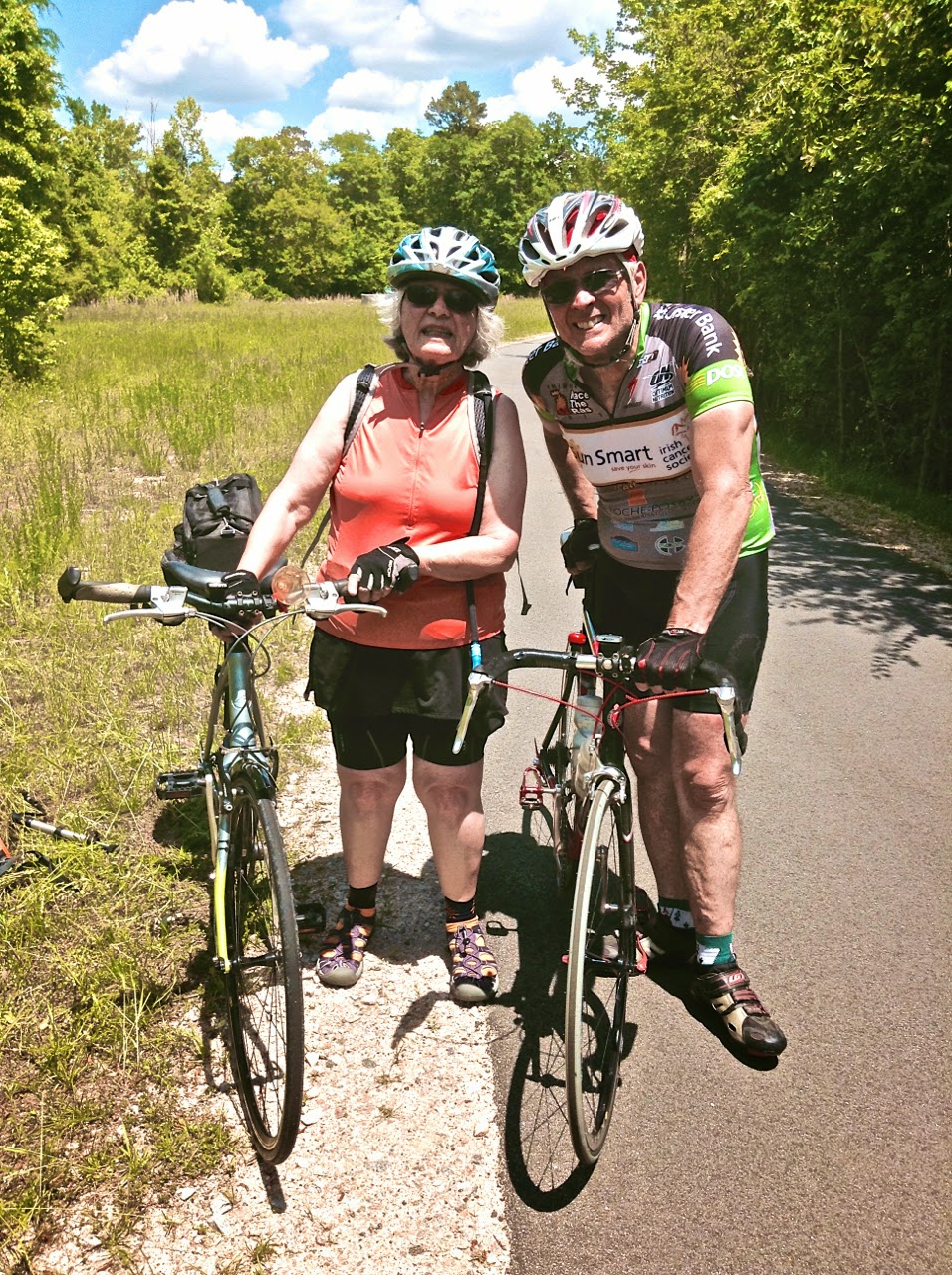 7AM Car Maintenance Event --- So, I skipped the gym.  Perhaps a noontime swim?

According to the service department rep, Ken, at Leith Honda after doing a major tune up that included changing all sorts of filters and fluids and a very fine going over: Our 2005 Honda which currently has 220,000 miles on it needs the following:

To be fair nothing in the list is anything I did not expect.

The math is: For around 6 months of new car payments we may be able to get another 100,000 miles out of our car.  I think this is a good bet given just how good these cars are.  However as with any machine other stuff could go wrong.

We do love this car.  Our kids call it 'The Space Ship'.

When talking to Ken I looked over my shoulder at the new car sales room and said, "I suppose I should check in with those guys."  And to be fair, Evelyn and I have been discussing just what to do about the upcoming 'big - maintenance - event'.

So Ken introduced me to Nahru who recommend I get the car appraised and they will meet the appraisal on a trade in on a new Honda Civic or Accord.

After talking with Evelyn when I got home we decided to test drive a Civic and an Accord tomorrow and see what we see.

So the first thing on the agenda was to take a trip up US70 to a used car place to get an appraisal. It was exactly what Nehru the salesman we spoke with yesterday said it would be.

So I completely cleaned out the car, (found an iPod mini of Rob's). Peeled off the stickers and the front license 'welcome to NC' and the Quick-Pass RFID tag under the mirror.  I left the little can of 'touch-up' paint and the owner's manual in the glove box, and put all three keys on a keyring that Honda gave us back in 2004 when we purchased the car.

Evelyn and I headed up to the bank and I found the title sitting right on top of all the papers in the lock-box.

As we drove around I540 to US1 I said we should just keep in mind that we were test driving and could always fall back on the 'six-months-of-car-payments-plan'.

We got over to the Honda place as Nehru was finishing his lunch.  Nahru had an appointment so he hooked us up with Derek. Derek organized a Civic and an Accord for us to test drive.

We drove the Civic first out the back way of the dealership and onto Durant Road and up past the Durant schools and turned around in the parking lot off a side street and came back.  When we turned around we switched drivers and one of us sat in the back seat to test the size of the back seat.  The Civic was definitely smaller but handled very well, I was impressed.

We drove the Accord next along the same route and compared with our current 2005 Accord.  This one was an "LX" vs "EX-L" and it did not have: a manual transmission, leather seats, power driver-side seat, multi cd changer, and moon roof. These items were most definitely the 'bells and whistles' of the 'Space Ship'.

The Honda Accord underwent a 'reset' in 2013 and they really tweaked the engine and automatic transmission.  It now gets 32-40 city-h/w mpg and has something called an 'eco-setting' that does something with the CVT (Continuously Variable Transmission) to increase mpg even more.  This means that the economy you realize with a manual transmission can come from the new CVT automatic.

Additionally the Civic and Accord now have have a massive high-technology electronics system that includs blue-tooth which allows it to act as the interface to an iPad/iPod/Cell-Phone.  The interface is a small color LED screen that also displays the trip computer and the controls for the radio/cd player. And lots of other stuff I'm sure.  It is all controlled via buttons on the steering wheel and knobs associated with the radio.

Additionally the color LED screen is connected to a little color digital video camera.  The Civic has one too.

The camera is mounted on the lip of the trunk lid just above the license plate.  When the car is put into reverse you see this grid superimposed on the direction to which you are backing, this grid is sensitive to how the steering wheel is turned so it shows you your path given you continue with that steering wheel setting.  (Just as an aside:  I just barely avoided wetting my pants when considering this system.  And when combined with the voice associated with this electronics package ... well ...)

The Accord was just as roomy as our current one and the handling seemed to be even a bit better. It almost seems like a 'drive-by-wire' car with feedback.

And as we got ready to leave Derek came up with the six CDs we forgot to eject from the cd player in the old car.  Additionally he helped us pair Evelyn's cell with the bluetooth interface in the car.

As we drove away from the dealership there was Mr Williams and my service representative from yesterday taking in the parking lot.  We pulled over and thanked them for helping us out.  I, jokingly, told the service rep we would go through this again in 10 years.

After stopping by and getting some supper from the grocery I put the stuff from our the old Accord into the new one and re-affixed the Quick-Pass RFID tag to the windshield.  So here in our driveway is the totally cool car, which is the same color as the old one with and the same license plate.

Here are some pictures of 'The Earth Dream': 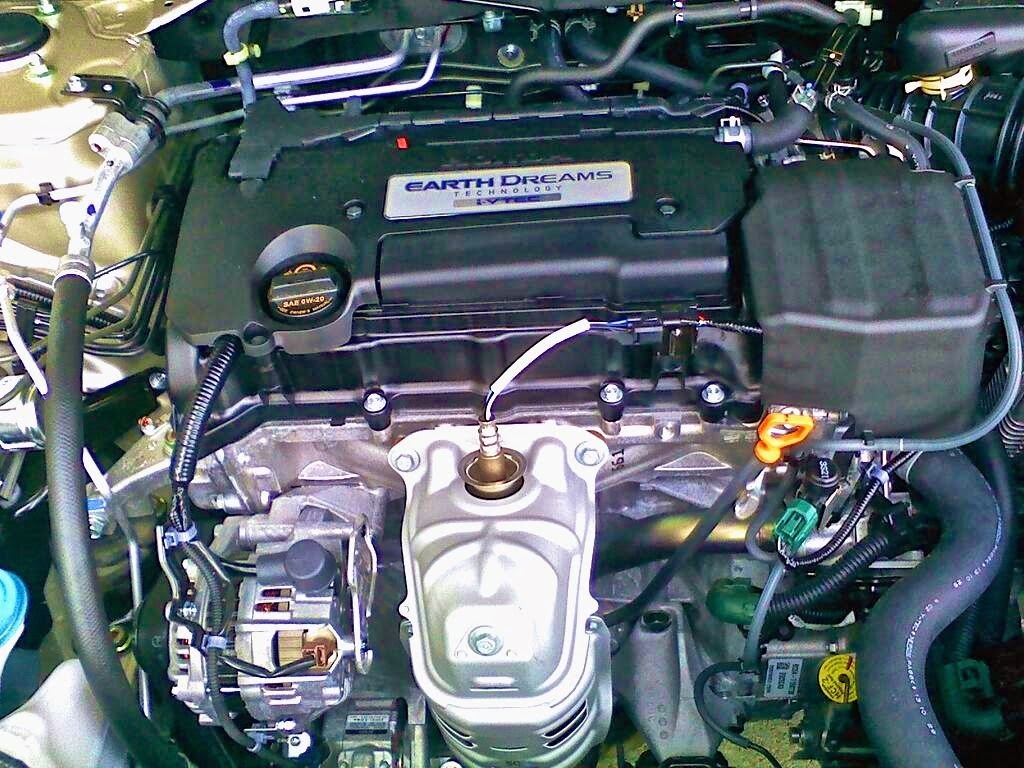