Here is the route "The Bay Ride" this morning the sky was overcast because 'The Marine Layer' had not yet burned off so we were in no danger of getting a sunburn.  The route is lined by Fennel which was full bloom and smelled great.  The bike path runs right beside I80 the freeway that runs down the East-Bay. and then diverges from the freeway and continues right along the shore line.

We did the 9.02 miles in about one hour or less.  The San Francisco Bay Area is planning on a trail around the entire bay here is a link "http://baytrail.abag.ca.gov/maps.html"

Here is a photo album of Me and Ginny when we were out riding.

After being slightly 'cooked' in the 80K "Cup-and-Cone" bike ride I did not want to repeat anything like that for this ride, so I opted for the 56K distance (vs the 100K or 160K distances).


Instead of over 100F temps this Saturday featured rain showers.  I am much better riding in the rain than I am riding in 100+ temperatures.  I do not know if that means I would have been successful with the 100K distance, and I am pleased with how I felt at the end of the ride and I think I've restored my confidence that I'll do just fine in the MS-240K (MS-150) come September.


I did not mount my bicycle computer so the figures below are approximate:


There were near 800 riders registered for the ride and it may be that most of them did show up for the ride.  The first group to leave started at 7:30 am and then others groups were let go up to around 8:15 am depending on how far you were going to ride.  I left around 7:50 am and arrived back at 11:10 am and subtracting off the amount of time I spent at the two rest stops I think 1:50 hh:mm is about right for the time I spent on the bike.


I did not find any of the up-hills to be super hard and none of the down-hills came out to be super fast so the ride did fit me very well.  I think all but perhaps 3 or 4 of the up-hills were completely ok, which means that I shifted into my 'granny-gear' only 2 or 3 times, and otherwise stayed in my middle-gear, and only 3 or 4 times switched to my 'big-gear'.


It is absolutely the case that I spend much more time grinding up hills than zooming down them. However because of my 'buoyancy-issue' going down hills it does even out, but makes it very hard to ride with a group because I coast down hill much faster and grind up hill much slower.  If I can change my density then I can ride with groups much better because I can peddle up hills with the group (assuming I have the same strength I have now) and will not have to break when going down hills.  This goal should be realized in about one year (9-10 months) when I hope to reduce to my maximum BMI.


Below is a picture of the returning 56K rider in his brand new BikeFest 2011 shirt.  And, it is hard to tell but the white stripe on the right actually spells out BIKEFEST2011 while the symbols on the left are the 'turn-signals' that are painted on the road.  When you do one of these type of rides you really do learn how to pick up the symbols and the 'white-stripe' is the ubiquitous road paint you see on the sides of the back-country two lane roads we travel. I've also included a picture of the cool water-proof queue sheet holder and my wrist band.


Also below is a video of 'Rest-Stop-One' the clip is blurry because I took it with my cellphone camera that along with everything else had been exposed to the driving rain shower I rode through (the cell phone is a "Casio-GzOne-Rock-Phone" which is OK being 'washed-off' and inadvertently dropped into water (something that two other flip phones I've owned did not survive). 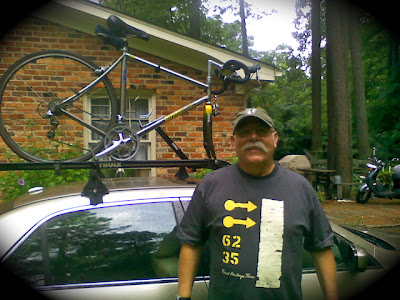 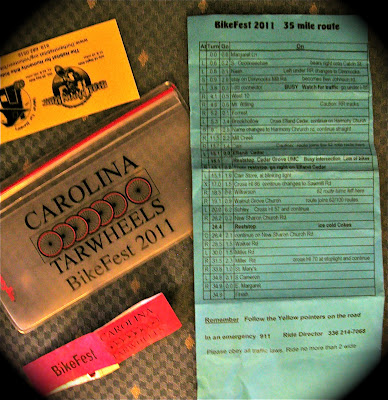