Five people go to lunch (Well, actually, five computer geeks go to lunch.)
The Mega Millions Lottery topic comes up in conversation. They decide to purchase a joint lottery ticket.  The rules for choosing numbers for this lottery are:
A suggestion is made that all the choices be prime. Since there are sixteen prime numbers between 1 and 56 and thirteen primes between 1 and 46 then the following process is decided on:

The worksheet for picking lottery ticket numbers has room for five sets of numbers, and the price of a lottery ticket is $1.00. For this reason the group decides to collect $1.00 from each person instead of $0.20 and thus the group can fill out the entire worksheet.

This decision forces the group to either reuse the same five prime numbers or to come up with four more sets of numbers. Since the odds of winning will be increased if four more sets of numbers are generated then that is the route decided on. It is decided that some sort of transform of the original set of numbers should be applied to get the rest of the sets. Here is the algorithm chosen:
NOTE: Here is a link to a more humorous take on the Collatz Conjecture

When you match up the first sixteen prime numbers with the group's favorite numbers you get the following:

Here are the resulting five sets of numbers.


Here are some numbers:


What this means is that the five sets of numbers above have a five in one hundred seventy five million seven hundred eleven thousand five hundred thirty six chance of being chosen. Another way to say it is that the odds are: 1 in 35,122,306


So here are the expected results: 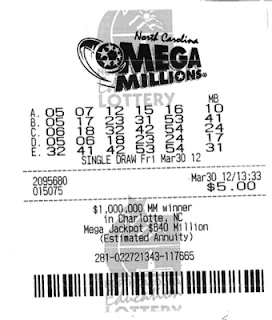 And Here are the Actual Results

As you can tell the expected results in all five instances do not match the actual results. And, you can also tell we messed up the Collatz path lengths for some of the numbers.  And, if we had done them correctly, we still would not have successfully predicted the numbers that were ultimately selected.

Here are some more numbers that fall into the category of "What If".  And really that is what the lottery is all about (what if).

Just how fast do you think you could you 'burn-through' sixteen million one hundred and twelve thousand two hundred and fifty dollars?