Yesterday looked like a good day for a ride.  The Neuse River Trail look like it was still messy.  I decided to give the ATT a spin.

The ATT has good points in that the trail surface is very nice.  This is the first time I've been on the ATT since the Durham County section has opened.

I traveled to the southern end and rode all the way to Durham to mile number 5 (of 22) giving around 34 miles total.  This allowed me to cross over I40 on the beautiful bike/pedestrian bridge.

The ride was the longest ride I've done since 'The Big Whoops' of 21 August 2016.  The distance I traveled was just a bit short of one half of a day's ride on the MS150.  So I have my work cut out for me to be in shape enough to do 4 such rides as I did yesterday in at two day period by September.

Here are the details of the ride:

Here are some pictures from the ride:

Last Thursday the 18th looked like a good day for a bike ride.  The big rains were over and the release of excess water from the Falls of the Neuse dam was ended, so I thought it would be ok to ride.

My first clue that the Neuse River Trail was not back to normal was when I turned down the road that leads to the car park for the trail and found that the gate was closed and locked.

I went ahead and parked in the small lot right at the dam and noted that there were other cars with bike racks so I got ready to go. 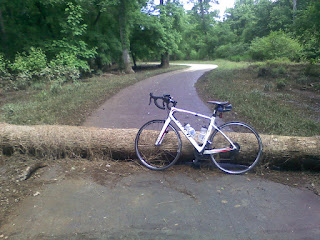 I decided to head out.  Sure enough even before arriving at the seven mile mark at the WRAL Soccer Center I came up on a log across the road.  I think it must have been lying alongside the path and when the river overflowed due to the release of excess water from the lake it floated in such a manner to position itself right across the path.  I figured this was the first tree down that the fellow talked about.

Also a few hundred yards down the trail there was a muddy patch and following that a puddle that was a maximum of 2-3" deep but served to nicely wash off my tires.  Then less than a mile later was a tree that was actually down across the trail.  here are pictures of this tree:

After passing the seven mile mark there were a few puddles and some dried mud but no other obstructions.  I had to decide where to turn around or to go on to Anderson Point Park and turn around there.

I decided to turn around at the one hour mark which would make for a nice two hour ride.  So the first bridge across the neuse, as part of the trail, and not a side trail was at about the 19 km mark and I found that to be a good spot to turn around.  Here is a picture:
The ride back was uneventful, except for the mud, the puddle, the big tree, and the log.  When I got back to the parking lot I did note some mud on the bike and washed it off when I returned to Swan Neck Ln.  Here is the picture of the bike:
Here are the stats of the ride: