I woke up last night at 3:00AM and finished the last few pages of Niel Stephenson new book Anathem. My sister gave it me as a Christmas present. It is one of those books that when you read it you are torn between two feelings. You want to rush through it because it is such a thriller and you want to slow down and read it slowly because you fear when you are finished with it you will wish it had not yet ended. In a talk that Stephenson gave at Google recently he discussed the criticism of how he ended novels. Well in this one I think it is not even possible that he can be criticized.

The book not only is a great thriller but also is very good from perspective of believable science fiction. The main (science) idea in the book; that consciousness is an intentional path that an organism follows through the multiverse created by the Many Worlds interpretation of quantum mechanics, is very satisfying.

Another idea expressed in the book, what the author calls 'sconic' philosophy comes very close to the idea of consciousness as a modeling engine. In particular the idea that we are only equal to our sensory inputs is also very satisfying.
Posted by Unknown at Tuesday, February 17, 2009 No comments:

I just got email with a link to the BBC article that talks about "Doodle Kids" an application for the iPhone written by a nine year old boy in Malasya. So here is my response to my friends email:

"61 Year Old Hacker Posts First Article On Code Project" When asked about this his 25 year old son, who is an accomplished digital animator, said ... "If Dad can do junk like that then a nine year old could write an iPhone application."
Posted by Unknown at Saturday, February 07, 2009 No comments:

A Trip To Ohio In The Winter 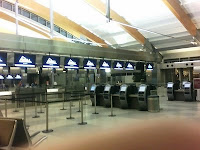 The new RDU Terminal 2 is beautiful. I picked up Ginny & Joe hear at Christmas but only got to see the ticket area and baggage claim. The ticket area is grand with just buckets of automatic kiosks to use to check in.
This time I was flying out so I got to go through security. It seemed very efficient and even 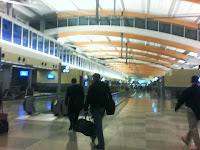 had one of those new body scanners. My flight was leaving at 6:50am (very early) so I think the number of airport employees and TSA folks actually outnumbered the passengers. Both the area where all the ticket kiosks are and the gate hall have these huge arching beams of engineered lumber that are very beautiful. I really do like that kind of architecture. 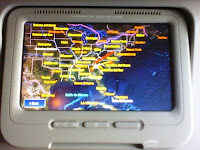 On the RDU-ATL leg we were flying a nice new Delta Jet and they still have their famous "moving map" display. I recall the first time I experienced it (on a flight to Spain). Still the same now but on a small touch screen. The screen has much more than just the moving map it also has airport maps and games. I browsed the airport maps and discovered that I have flown into all the airports listed excepting two. A trivia game where you compete against the other passengers was also available and I actually won one of the rounds. Each question has a point value that decreases with time so the first person to get the right answer gets the maximum number of points.
The Atlanta airport hasn't changed, and like all good airports every where it does not offer any services for free that it can 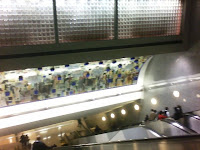 charge for. When up bring up your WIFI device there is one access point and when you connect there are offers to connect to a few random ISPs and to T-Mobil. Sadly my free year with T-Mobil that came with the XO computer I got last year by participating in the G1G1 just expired. The G1G1 program for 2007 and 2008 are no longer running but if this larger program is still going strong next Christmas I expect it may run again. 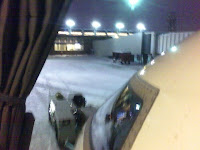 Next it was on to Canton Ohio and about 12 new inches of snow. The good news about Ohio is they are good at snow removal and the streets were plowed and salted. We got back to RDU late in the evening rounding out an 18 hour day.
Posted by Unknown at Sunday, February 01, 2009 No comments: