Posted by Unknown at Saturday, October 31, 2009 No comments:

A link to the Earth Observatory page at NASA:
http://earthobservatory.nasa.gov/NaturalHazards/view.php?id=40615
And a link to a Google Earth file:
http://earthobservatory.nasa.gov/images/imagerecords/40000/40615/parmamelor_mod_2009279.kmz
Here is the text that goes with the picture:
Once a powerful Super Typhoon, Parma crossed over the northern tip of Luzon Island, the Philippines, on October 3, 2009, as a Category 1 typhoon. The storm battered the island with damaging winds and heavy rain before moving over the South China Sea, where it stalled, spinning more or less in place for about a day and a half. On October 6, the storm reversed direction and moved southeast back over Luzon. What caused this change in direction? The answer is shown in this true-color image from October 6. Powerful Super Typhoon Melor moved close enough to Parma to influence its motion. When two cyclones approach one another, they can interact in a variety of ways. One interaction is the Fujiwara Effect, in which the two storms are drawn together and begin to circle each other. In this case, Parma was drawn towards the stronger Melor. Occasionally, the stronger storm will absorb the weaker storm, but that fate wasn’t in the forecast for Parma as of October 6. The Joint Typhoon Warning Center expected Parma to move south away from Melor and eventually track west over the South China Sea on October 8. This image blends two satellite overpasses to show the proximity of the two storms to one another. The left half of the image, containing Tropical Storm Parma, is from the Moderate Resolution Imaging Spectroradiometer (MODIS) on NASA’s Terra satellite, acquired at 10:35 a.m. Philippine time. The right half of the image was taken just under two hours later by the MODIS instrument on NASA’s Aqua satellite. The time difference causes the subtle differences in lighting from one side of the image to the other. Parma left at least 22 people dead and damaged millions of dollars of crops and infrastructure in floods and landslides across northern Luzon as of October 6, reported Reuters. The storm is likely to do more damage as it tracks slowly south over the island, pouring heavy rain. The Joint Typhoon Warning Center expected Melor to come ashore over Japan early on October 8 (local time) as a weak Category 1 typhoon. At the time of these satellite overpasses, Tropical Storm Parma had sustained winds of about 100 kilometers per hour (60 miles per hour or 55 knots), according to the Joint Typhoon Warning Center. The storm maintains a spiral shape, but no longer has the tightly packed bands of clouds exhibited by the much stronger Typhoon Melor. At 12:10 p.m. Philippine time, Melor had sustained winds of about 200 km/hr (130 mph or 115 knots), making it a Category 4 typhoon.
Posted by Unknown at Thursday, October 15, 2009 No comments:

Here is a map to Sue's Retirement Party:
We are getting together to celebrate Sue's employment at Nexus Software (Diebold Software Solutions)
Tursday 15 October starting around 11:15am at the Crazy Fire Mongolian Grill in the shopping center at the corner of Leesville Road and Strickland Road (Leesville Road Exit of I540) here in Raleigh, NC.
Hope to see you there.

View Misc in a larger map
Posted by Unknown at Thursday, October 08, 2009 No comments:

So ... I launch my Web Browser each morning to check my email and the pages I monitor and to get to my email program I go through the page www.google.com which has a link to an online application called GMAIL. Google is know for changing their home page with stylized versions of their logo. It is always interesting to see when they do this. Today's home page looks like the following: 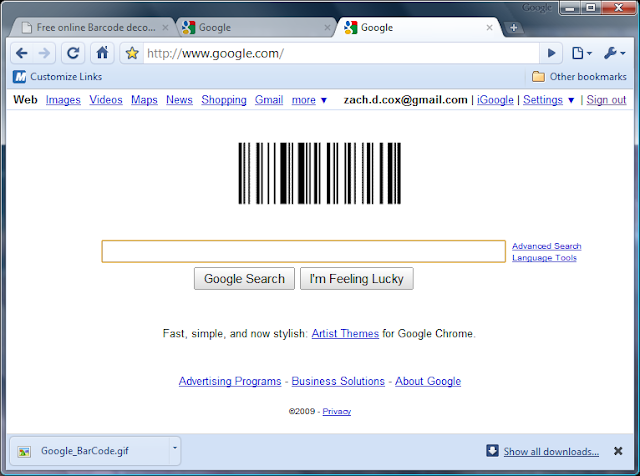 I can imagine that the value of the bar code that has replaced the normal Google logo actually spells the word "Google" I think about whether or not a laser scanner could read the image of a bar-code from a computer screen. Then I wonder if there is some sort of application that could take a .GIF or .JPG or .PNG file that was the image of a bar-code and decode it giving the content. I know I can right click on the graphic on the Google home page and save that graphic to a file and when I do I get the graphic below:

To see if an online application exist that can read the graphic file and decode the bar code it represents I did the 'Google-Search' against the search string "Online Barcode Reader" as illustrated below: 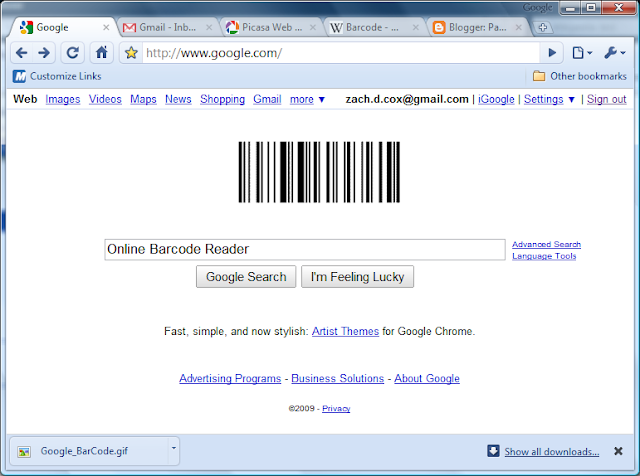 Sure enough the search finds a web site called http://onlinebarcodereader.com and this web site
allows you to upload image files and see what they decode to. When I upload the image file of the Google logo here is the result: 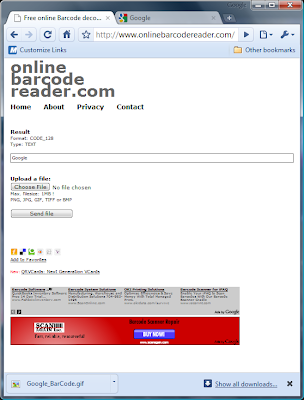 Sure enough the image file represents the text string 'Google'.
Posted by Unknown at Wednesday, October 07, 2009 No comments:

We had a grand time with Evelyn's cousins this weekend down in Beaufort. The highlight of the weekend was a "Three-Hour-Tour" abord the speed-boat Ink-Stink.
Here is a link to the pictures for the weekend: 2009_Cousins_Weekend. And below is a Google maps of the area where our tour took place.